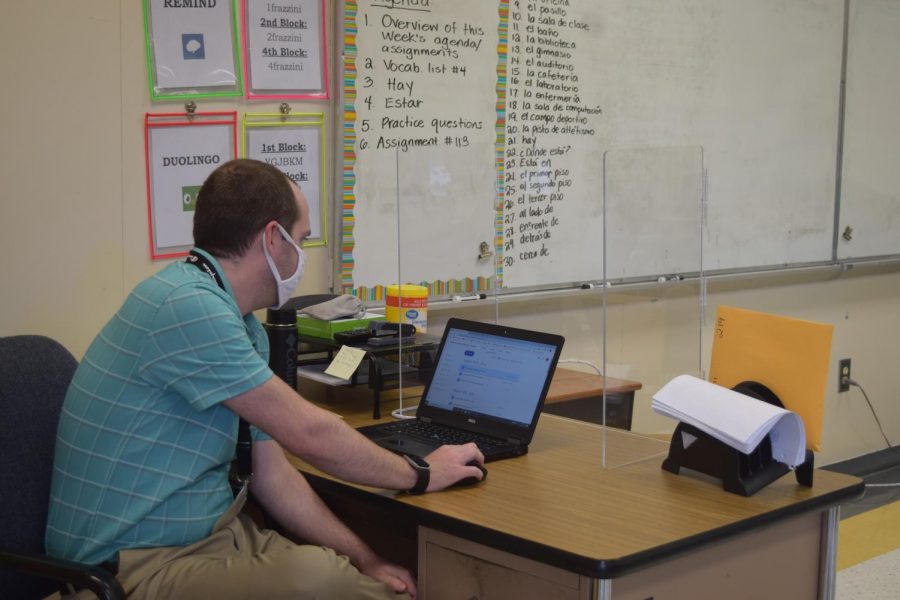 For new Spanish teacher Mr. Robert Frazzini, coming to work at Socastee High School was a big change — literally.
He comes here from Aynor High School, which has half the number of students as Socastee.
“We only had two of us in the world language department,” he said.
Socastee’s academic offerings made the school attractive for him.
“It was an IB school, so I thought that would be a good place,” he said. Mr. Frazzini is IB certified, but doesn’t currently teach it.
Before teaching at Aynor for three years, he taught up north in Ohio where he is from, for six years. He completed his undergraduate degree at Youngstown State University and his masters at Liberty University.
He was inspired to become a Spanish teacher after living in Spain for six months as a student. He already was an education major, but he wasn’t set on a specific subject until his trip abroad.
“I enjoyed learning the language, learning the culture, and it was one of the subjects in high school and throughout college that came easy to me,” he said.
Mr. Frazzini describes his teaching style as “laid back”, although serious when he needs to be.
“I think it’s a combination of both,” he said. “Ready for anything.”
He would like to have his students doing more in groups and have more interaction with them, but due to Covid-19 this has changed. “So trying to adjust to that, obviously, I can’t do much with the collaboration,” he said.
Since Mr. Frazzini has been busy working on his master’s degree for the past few years, he has not been involved in extracurriculars, but he would like to in the future.
“I do like to get involved and have a strong presence in the school,” he said. “I’ve coached [soccer] in the past and I’ve been involved with Spanish club.”
Outside of school, he likes the outdoors.
“I love to go to the beach,” he said.
He also runs, and plays soccer and tennis.
“I try to stay active as much as possible,” he said.
He has a twin brother who still lives in Ohio, along with another older sibling and his parents.