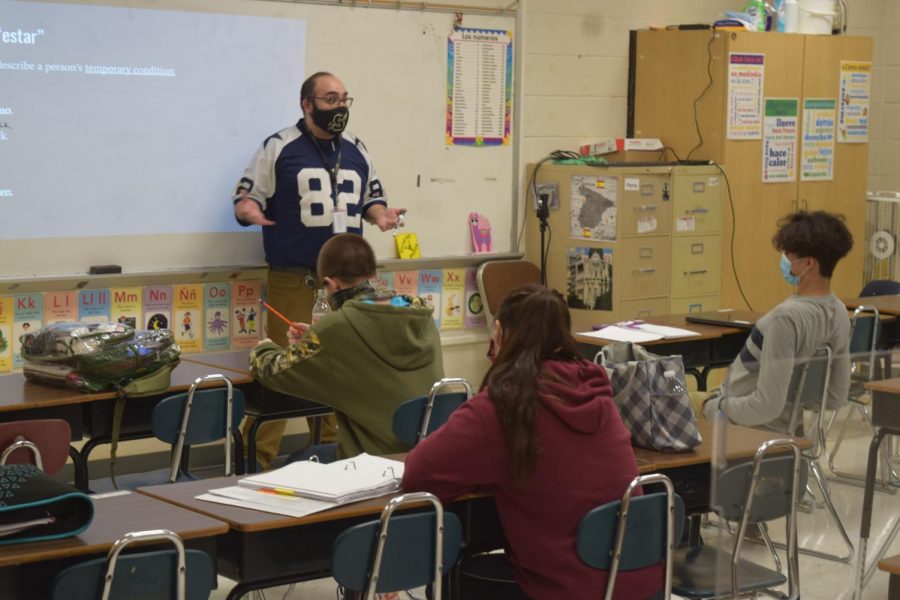 New Spanish teacher Mr. Matthew Parris has had an interesting career path that led him back to his alma mater, Socastee HS.
After attending Coastal Carolina University as a Spanish and Journalism major, he worked in sports radio, then television, and most recently as a reporter for WPDE, ABC 15.
“It was fun, but… I was looking to change and I came back to what I originally wanted to do, which is teach Spanish.”
He is happy with his decision to change careers.
“I’m happier than I’ve ever been doing anything,” he said. “It’s more fulfilling than anything I’ve ever done.”
Throughout his early life, Parris also held a passion for Spanish and teaching. He loved helping people understand topics they struggle with.

“Some people get math, some people get science or whatever, I got Spanish, so it was something I hooked onto immediately.”
He said he likes how practical Spanish is.
“You could walk down the street and speak Spanish to someone using exactly what you learned in class that day, so that kind of lit a fire under me,” Parris said.
Mr. Parris, who graduated from Socastee High School in 2007, said he also was inspired by teachers here. He took Spanish 1 in the very room, 224, that he teaches in now. And he said Mrs. Leggett, who retired last year, was one of his favorite teachers.
“She used to let me teach a lesson or two every now and then to the class and things like that, so I got some real world teaching experience,” he said.
The experience also helped him realize he was good at helping people understand Spanish.
“That was kind of taking that gift and realizing that I could do,” Parris said.
Teaching his first year in a hybrid situation due to COVID is not ideal, but Parris said his background in news made him very comfortable with technology — especially video.
“That’s the thing, it’s not really an adjustment because it’s just, that’s how I started, right?” said Parris.
Even though his background made his integration into teaching online easier than it had most, there are still communication problems that he may face with his students. He encourages his students to not be afraid to ask for help .
“I tell my kids in here that we’re learning a language, we’re going to make mistakes,” he said. “We’re literally babies, right, we just don’t know anything, right, so we’re learning, we’re learning, we’re learning, so we’re not going to laugh at each other, we’re not going to do this or that, you’re going to make mistakes, you’re going to keep moving on, but if you don’t try, you’re never going to learn.”