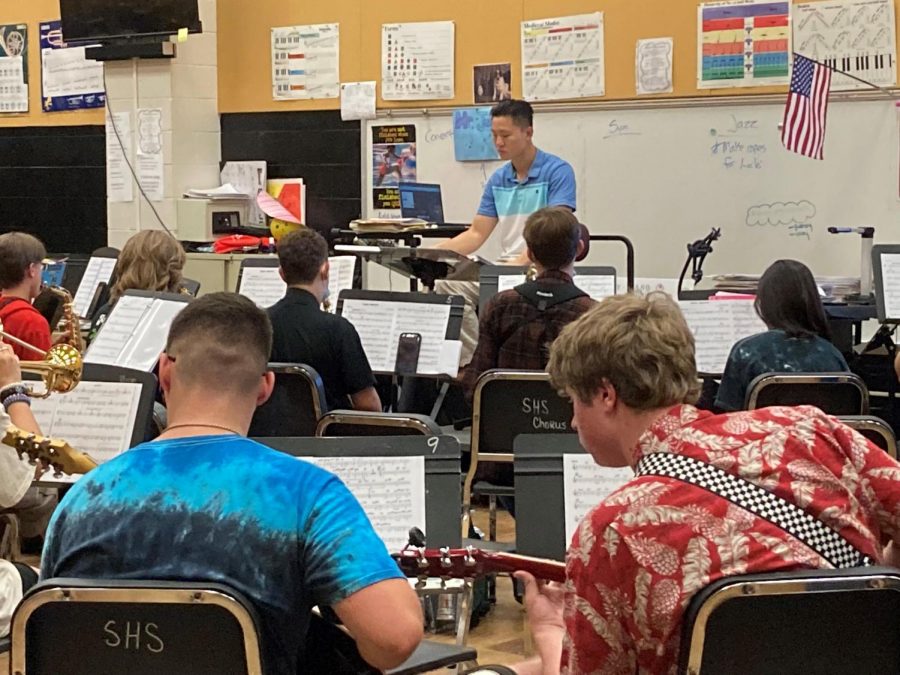 New Band Director Mr. Will Jung brings years worth of band experience to the school. One of his many accomplishments includes starting up band programs in rural China.

Mr. Jung is a first generation American who grew up in Fayetteville, NC, where he developed his love for band. After getting a music education degree from UNC Chapel Hill, he started his career in Raleigh as a music teacher. After his first year of teaching, he was offered a position in Qingdao, China, by the Drum Corps International China Fellowship. He taught in China for two years until he decided to return home and eventually applied to be the band director at Socastee.

One of Mr. Jung’s strongest influences in music are his parents, who started him on the violin when he was two years old.

Mr. Jung was in band throughout middle and high school, and didn’t realize he wanted to pursue a career in music until his first high school band director, who he sees as a father figure, was replaced by someone who he felt cared less about the band.

“I thought, if I become band director, I can prevent something like this from happening to my kids,” he said.

His first band director, Charles Dumas, continues to inspire him to this day and coincidentally now works for Myrtle Beach High School, not even 20 minutes away from Socastee.

Mr. Jung continues to be inspired by his first experiences in band and applies these experiences to his teaching.

“I want their energy to match the music but also add their own flair to it,” Mr Jung said.

One thing Mr. Jung is passionate about is the development of character within his students, on and off the field.

“I tell my kids to never give up, because making music is beautiful,” he said, “And the discipline that goes into that, you can apply it to any aspect of life.”

He said he sets high expectations. “Everyone needs to do their part,” he said, “but if you’re struggling he will help you; he’s very patient.”

Mr. Jung has high hopes for the future of the band, including bringing home the first BOA (Bands of America) trophy.

“Not just for the trophy, but because the program is so good and the kids are in such a positive environment that our best performance just happens to earn a trophy,” he said.

The band has attended many competitions and has placed first in a number of  them including the Lowcountry Invitational, St. James Finfest, and the Conway High School Rivertown Fanfare band competition. They ended their season  placing 10th overall at the South Carolina Band Directors Association Lower State Class 4A Championships.

“To have taken a band that started with 15 kids,” he said on Twitter, “leading to the most intense and emotional run yesterday, I cannot be more proud of my students’ accomplishments.” The marching band now has 22 students.

Sophomore Brianna Fahey, who plays clarinet in the marching band, is as equally as grateful to have him as her band director.

“He’s really thoughtful,” she said.”There’s a difference between a teacher who cares and one who doesn’t — and he cares.”