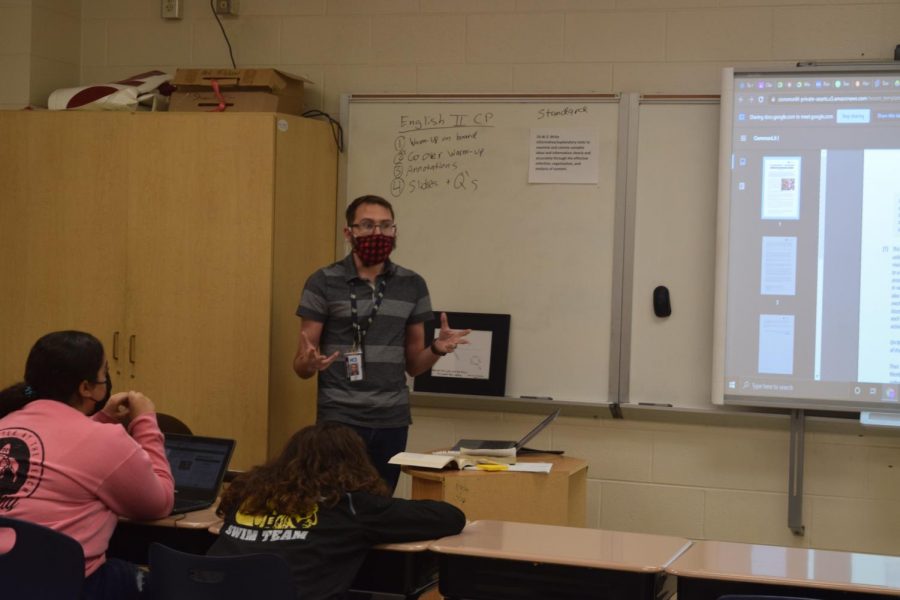 Mr. Mol shares a presentation with his English students.

English Teacher Has the Write Stuff

Socastee’s newest English teacher is a former middle school teacher who said he is happy to be working with older students.

“High school has always been my goal,” said Mr. John Mol, who came here from the Georgetown School District, where he taught 8th grade for four years.

He said he likes that high school students are more mature, as is the class content.

“It’s much more of a combination between writing and literature,” he said.

Soft-spoken, Mr. Mol teaches English 1 and 2, and describes his teaching style as “discussion based”.

“I like to have students talk out whatever they’re learning,” he said.

Edward Chalate, who has Mr. Mol for English 1, said, “He is a nice teacher.”

So far, the most challenging thing about teaching high school English has been teaching Shakespeare, Mr. Mol said.

His background and strengths are in writing.

He earned an English Language and Literature degree from the University of South Carolina, then a Masters in English Literature from Winthrop University, where he was Asst. Director of the Writing Center and a writing tutor. He also worked as a freelance writer for marketing companies for two years during graduate school.

“My favorite thing to teach is writing rhetoric,” he said.

Born in Lodi, New Jersey, Mr. Mol moved here when he was 8. He is married and has two dogs, Riker and Rosie, and two cats, Scully and Navi. Riker is named after a Star Trek character, Scully is named after Scully from the X-Files, and Navi is named after a character in The Legend of Zelda.

Mr. Mol lives in Conway, so he now has a much shorter commute than when he taught in Georgetown, giving him more time for his hobbies. They include reading, playing video games (his favorite are Mass Effect and Witcher 3), building computers and playing guitar.

“I played a lot of guitar in high school,” he said, “so I’m currently reteaching myself to play.”