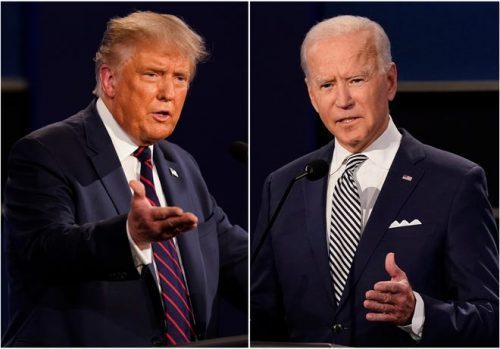 Vote Against the Establishment

This election is a crossroads: to some before heaven or hell, to many between hell or a hotter hell. I see it as a last stand for a free republic rooted in individualism and truth, versus an Orwellian nightmare sucking up what is left of any hope for a free future. Donald John Trump, bombastic and crass as he is, is the last defender against an authoritarian cabal. But will the modern world and American people allow him the presidency?

For decades, the American people have been subject to an establishment government driven by crony politicians and bureaucrats. The bulk of both Democrats and Republicans have been corrupt. Bush, Clinton, Obama, were all the same. All corrupt, all crooked. Between the Iraq war, suspicious pardons, and illegal surveillance, there’s more than enough corruption for a decade or so. But the election of President Trump four years ago let a Bull in their China shop, and all the porcelain came crashing down.

Trump’s initial presidential win was a miracle really. To have someone kick down the doors of the political scene, make fun of politicians people didn’t like in front of millions of viewers, say the quiet part loud and the loud part quiet, gain momentum and popular support,  and win the presidency against one of the most corrupt people in American politics, was unusual and a spectacle.

Now, Trump is facing down reelection in mere days. The question lingering is whether or not the establishment still holds the reins? The modern world’s hyperconnected World Wide Web is the worst and best place to engage in politics. The fast pace being the biggest detractor, and the abundance of information being the biggest selling point. This develops an interesting dilemma.

On one hand, the obviously biased big tech companies censor and ban anyone and anything that goes against the Democrats and Joe Biden. The majority of the mainstream media, bought and paid for by (or at least biased towards) the Democrats, covers for any fault the Democratic nominee shows, opting to magnify any faults of the Republican candidate.

On the other hand, regular Americans are sharing videos of Black Lives Matter supporters burning down buildings in Portland and articles publishing emails showing Joe Biden’s corruption with the Chinese and Ukrainian governments. Videos made by Project Veritas expose voter fraud and Google’s bias against right wing politics. Spreading truth, one Facebook post at a time.

Again, a sort of crossroads arises. If Biden wins, what does it mean for the country? And vice versa. The meaning of each result is what matters most here.

If Biden wins, do not expect another anti-establishment president like Trump to win again in our lifetime; the establishment and their cronies will remain in control. Trump was only a fluke, and America remains under the boot of those who have the money and the power. No Ron Pauls, no Bernie Sanders, no Andrew Yangs. Most importantly, it will show them that the American people will accept lies if they are injected with enough propaganda — a central theme of George Orwell’s 1984.

Now, as someone valuing freedom higher than any other ideal, it is a little difficult to fully support the current president. Direct welfare, gun restrictions, and debt spending come to mind. Some may also throw up in their mouth a bit hearing Trump and Truth in the same sentence. These criticisms do not go unheard. Everyone is aware Trump isn’t exactly the supreme arbiter of truth. Some outlets crediting him with over 20,000 lies or misleading statements. But he is sort of the only choice. Biden is a senile oligarchic puppet, soon out to pasture, one way or another. Jo Jorgenson, Libertarian Party candidate, (who notably hails from our state’s Clemson University) has endorsed the collectivism of the Black Lives Matter movement. Plus, she won’t win anyway.

The President’s style of speaking (to put it politely) is both a blessing and a curse. It can make him charismatic or funny to some, and works great when he needs to make his opponent look bad. However, when it comes time to say something serious, important, or statistically accurate, it doesn’t help. His mind also runs completely erratically, which doesn’t help him in sounding coherent. It is his biggest flaw, by far.

Still, at least half of these “lies” reported by mainstream news outlets can be chocked up to mistakes, gaffes, and jokes. And of course, he does lie purposefully; he’s narcissistic and laser focused on winning. Biased as the majority of legacy media outlets are, when they call Trump out on a lie, they are doing their job and doing it correctly, just like Obama, Bush, or any other president who lies. However, nobody is keeping count of the lies from news outlets, Democrats, and Joe Biden himself. If one takes into account the blatant, deliberate lies and disinformation published by anti-Trump news outlets,  Trump’s mistruths and dishonest statements simply don’t compare.

From a Libertarian perspective, Trump certainly isn’t perfect, and in an optimal society most libertarians would consider Trump to almost be a socialist. Nevertheless, if the election goes to him, think of who we would get by next. Rand Paul if we’re lucky. No one knows the limits. So choose wisely. Liberty, or slavery.

A vote for Joe Biden is a vote for justice. Justice is the concept of everyone getting what they deserve. It is fair to say that we do not live in a very just society under President Donald J. Trump.

First, the way we reward labor in our society is fundamentally at odds with the value of that labor. Some of the richest Americans have not produced anything tangible in decades. They either won it on the markets or inherited it. They contribute nothing to the economy excluding capital. They do not even pay their fair share of the taxes to the government that allows them to make such immense lucre.

By using their political influence, the super wealthy have successfully written a tax code that allows them to pay less taxes as a percentage of their income than the rest of the population. In addition to tax reform that will bring back the middle class, Joe Biden and the Democratic Party will bring in mandatory paid sick leave, healthcare reform, and many other solutions to the economic crises of the modern world.

Democracy is more than just a method of choosing policies; it is also the spirit in which we hold each other. In a democracy, there should not be unreasonable investigations, bought offices, and corrupt bargains. However, the Trump administration has spent the last four years using the full arsenal of the federal government to attack his rival, sell off political offices to the highest bidder, and enriching himself at the expense of the American people. Trump has destroyed the rule of law.

First, he instructed the government to investigate an unsubstantiated conspiracy theory about his challenger Joe Biden and Biden’s son Hunter. If this was not enough, he has completely ignored American whistleblower protections and instructed the Department of Justice to attack those who try to warn the people of his misdeeds, which include tax evasion, campaign violations, and illegal conspiracy with foreign agents. This has created a culture of authoritarianism among those who should protect us from executive overreach.

There is only one way to restore American democracy. Vote for Justice! Vote for Democrats up and down the ballot. While Joe Biden for President and Melissa Watson for Congress may not be the perfect candidates for America this year, they are the best we have.