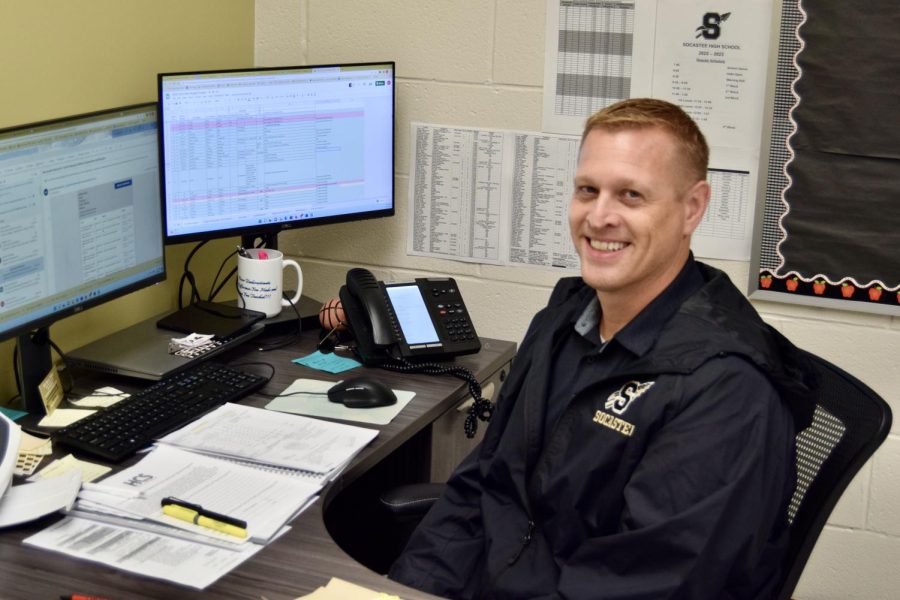 New Guidance Counselor Mr. Greg Scott says his job is something that comes naturally to him. In high school, he was always the friend that would help others.

“After a while I kind of figured out I had kind of a knack for that,” he said. “I enjoyed helping my peers at that time.”

He also was motivated to become a counselor by his experiences as a high school student.

“I only met my counselor I think one time in four years,” he said. “I felt very like I wasn’t served as a student and I wanted to do more.”

“Going from about 100 students at Aynor to roughly 1,800 here is a bit of a difference,” he said. “But that’s definitely a positive; I’d rather deal with more students.”

Mr. Scott was born in Ohio and went to college at Lincoln Memorial University in Tennessee. He coached college basketball at the college he went to. He liked the job, but not the travel.

“Once we started traveling and recruiting and being away from my family; I didn’t really like that part of it,” he said.

Despite having worked in a lot of different places, one thing remains the same, he said.

“Kids are kids, there’s no difference really,” he said. “Whether you’re from East Tennessee or from Socastee High School, or Aynor High, they’re all the same.”

Mr. Scott lives in Foresbrook and working at Socastee has cut down on his commute.

“It saves about seven hours a week,” he said “This is a good school. This was really the only place I would have left Aynor for. I’m very happy here.”

He is following the same advice he gives students as he faces the challenges of getting to know his way around a new school.

“Take your time. Get through it bit by bit and you will get there.”