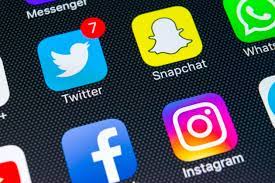 OPINION: Social Media Exacerbates — but Does Not Cause — Societal Problems

New technology is always scapegoated for society’s problems; however, those problems were already there. Social media–media that allows for immediate bidirectional communication with little to no gatekeeping – did not change humanity; rather, it demonstrated more plainly that people are cruel.  Social media is often blamed for – more specifically – consumerism, bullying, and toxicity. While social media is a means to further these ends, social media did not cause any of these problems. They are endemic to humanity.

Consumerism–an obsession with getting more stuff–dominates our global culture. Everyone wants more. Social media further agitates this hunger for things by incessantly reminding people of all the brand new cars, cool trips, and other things that “would make their lives perfect.” Nevertheless, social media did not create consumerism. People have been striving to “keep up with the Joneses” for longer than there have been consumer products. Hebrews 13:5 reminds the people of classical antiquity to “[k]eep [their lives] free from love of money, and be content with what [they had].” The act of people flaunting their possessions was not created by social media either; it is the central theme of “The Necklace”, a short story published in 1888. Thus, while social media makes it easy to see, social media never causes consumerism. It was there all along.

Bullying is human cruelty at its purest. It involves figuring out what makes people vulnerable and singling them out for it. While social media can be used to bully, on or off-line, bullying is fundamentally the same – humiliating one person for other people’s enjoyment. Bullying has always been part of the human experience. In The Canterbury Tales, a character called the Pardoner is bullied by another character for supposedly being homosexual. The Pardoner–who has already demonstrated his embarrassment with lacking facial hair and having a feminine voice–is humiliated simply to appease another character’s appetite for social power. This is not so different –except that it is a fictional account of a very real experience in many persons’ lives–from the cyberbullying that LGBTQ people, for example, experience today. In both cases, they are made to suffer for the benefit of another. As this story writing demonstrates, bullying has persisted for centuries.

It can be argued that, while bullying once required a face, one can now bully someone else online without having to see the suffering inflicted; however, this ignores the reality that bullies justify their behavior by deciding their victims are not worthy of full moral consideration no matter the distance. While it may commonly happen online, the most repulsive dehumanization campaign occurred in Germany in the 1930’s, long before modern social media existed.

Finally, political toxicity surged with the rise of the internet. As social media began to enter people’s lives, so did the age of tribal partisanship. While these things are correlated–and often reinforce each other, neither one caused the other. The root cause of toxicity has always been geographic isolation. The most political toxicity America ever experienced was in the Antebellum Era when politicians literally caned each other on the Senate floor and eventually split the country over politics. There was no social media at the time.

This latest round of political toxicity is also caused by geographic isolation. The political divide between rural and urban has grown more than ever before. When people knew their neighbors, they could not hate their neighbors. Now, when a majority of American partisans have only a few friends with different political beliefs, people have much less difficulty hating the “other side.” This hatred often leads to echo chambers where people surround themselves with people who think like them and never really experience the other side. The ability to control what enters one’s feed and other aspects of modern social media certainly does not help, but they do not ultimately cause echo chambers.  Just as watching only liberal or conservative television can cause echo chambers, reading only pro-slavery or anti-slavery newspapers in the mid-eighteenth century created echo chambers then. While social media can easily create such echo chambers, unless geography forces people to, people will not have friends who disagree with them; thus, society will remain toxic. Democrats will “Friend” Republicans on Facebook if they know Republicans. Republicans will read Democrats’ Tweets on social justice if they know the author. Thus, social media has the potential to reduce toxicity or increase it.

While social media is always connected to these human failings in the modern world, it never causes them. Banning manipulated photos of models from Instagram will not make kids less ashamed of their bodies; it will only make them covet the magazine models. Heavily policing social media posts to stomp out cyberbullying will just cause a resurgence in face-to-face bullying. Removing extremists from social media will only make them reassemble into militias. All of these problems must be solved at the root; an endless game of social media whack-a-mole will do nothing. That social media did not cause these problems demonstrates we must change humanity to solve them. Social media abuse is merely a symptom of the problem. The problem is that people are often cruel wolves to other people.