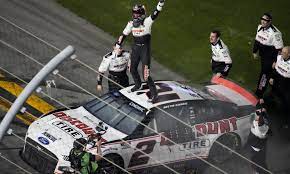 Cars to the rear end of the field: No. 22 Team Penske Racing Ford Mustang driven by Joey Logano, The Stewart Haas Racing Ford Mustang No. 14 of Chase Briscoe, Daniel Hemric’s No. 16 Kaulig Racing Cheverlet Camaro, and the No. 27 driven by Jacques Villenueve for Team Hezeberg powered by Reaume Brothers Racing.

Lap 7: The No. 18 of the Joe Gibbs Racing Toyota Camry driven by Kyle Busch takes the lead.

Lap 38: Fords pit for two tires and fuel but some adjustments.

Lap 39: Toyotas and Cheverlets come in and pit as well as some fords that couldn’t make it to the bottom. Same calls as the Fords.

Lap 40: Jacques Villeneuve spins entereing pit road. Fords and Cheverlets make the pitstops. Ty Dillon racing for Petty GMS Motorsports in the No. 42 has been penalizied for speeding on pit road. Kyle Busch takes the lead as it has been cycled to him from Joey Logano.

Lap 41: Kaz Grala in the No. 50 Cheverlet Camarosfor The Money Racing Team loses a wheel. And Chase Briscoe was spun by the No. 2 Team Penske Racing car of Austin Cindric. Caution comes out.

Lap 49: Outside line is stationary.

Lap 51: Outside line starts moving up the leader board led by Joey Logano.

Lap 56: Kyle Busch to lead the field back to green. Ryan Blaney has an issue on the right rear.

Lap 58: The No. 24 of William Byron for Hendrick Motorsports takes the lead from Kyle Busch.

Lap 62: Harrison Burton who leads the top line falls back with 4 to go before the end of Stage 1.

Lap 63: Harrison Burotn flips in the first big one after he was spun and hit Kyle Busch and William Byron and he took a hard hit to the inside wall off of Turn 2.. Denny Hamlin will not win another Dayotna 500 today. Christopher Bell in the No. 20 for Joe Gibbs Racing is also in this as well as Alex Bowman and Ross Chastain in the No.1 Cheverlet Camaro for Trackhouse Racing. Kurt Busch in the No. 45 Toyota Camry for 23XI Racing has some right side damage.

Lap 67: Harrison Burton is okay after a wild tumple on the backstraight. He has been checked and released from the infield care center.

Lap 69: The field comes to pitroad. Most teams will take four tires and fuel maybe some adjustments. Erik Jones in the No. 43 for Petty GMS Racing wins the race off of pitroad.

Lap 71: Erik Jones leads the field back to the green. Stage 2 begins.

Lap 72: Ryan Blaney takes the lead from Erik Jones with the of help Austin Cindric.

Lap 76: Erik Jones moves to the top line and leads that line.

Midrace report: 5 cars are out of the race. There have been 3 cautions. There have been 16 lead changes among 10 different drivers. There are 31 cars on the lead lap, and Justin Haley is two laps down, the free pass car. Greg Biffle took his No. 44 NY Racing Team Cheverlet Camaro to the garage, since then he has come back on to the race track 62 laps down in last place.

Lap 103: Cheverlet teams come in to pitroad for gas and maybe two tires.

Lap 108: Every one in the lead draft pit except for the Toyotas. Calls for two tires and gas.

Lap 109: Toyotas pit this time along with the No. 9 Cheverlet Camaro  of Chase Elliott for Hendrick Motorsports. Calls for fuel and two tires.

Lap 110: Brad Keselowski leads. Daniel Suarez was to fast on pit road and pays the penalty.

Lap 124: Brad Keselowski blocks the top line that was led by Kyle Larson.

Lap 130: Joey Logano uses Chase Bsicoe as a pick to take the lead from Brad Keselowski. Martin Truex Jr takes the lead from Joey Logano to sweep the stages. Top 10 gets points. Caution comes out. Daniel Hemric is granted the free pass.

Lap 133: The field comes to pitraod. Mostly four tires and gas for later on in the race. Brad Keselowski wins the race off of pitroad. Micheal McDowell is granted a speeding penalty.

Lap 137: Brad Keselowski to lead the field to green.

Lap 151: Tyler Reddick running the No. 8 Chevelet Camaro of Tyler Reddick for Richard Childress Racing is in it. Tyler Reddick was spun by the lap car of the Jacques Villenueve spun Tyler Reddick and he collected Joey Logano and Martin Truex Jr and Kurt Busch. Caution is out.

Lap 155: Lead lap cars come onto pit road for fuel only or two tires. Brad Keselowski won the race off of pitroad.

Lap 158: Austin Cindric is to lead the field to the green.

Lap 162: Bubba Wallace in the No. 23  Toyota Camry.for 23XI Racing takes the lead from Austin Cindric and now there is a battle for the lead.

Lap 165: Buba Wallace moves back up to the high line.

Lap 166: Austin Cindric draws even with Bubba Wallace off of Turn 2 and stay side by side.

Lap 174: Bubba Wallace takes the lead from Austin Cindric with the help of Kyle Busch who is aggressivly pushing.

Lap 190: Kyle Larson gets into the No. 4 Stewart Haas Racing Ford Mustang of Kevin Harvick and the 3rd ‘big one’ happens. (Wreck will be in the link below the article). Chase Elliott also spun and Erik Jones was collected. Noah Gragson running for Beard Motorsports in No. 62 was also collected. The No. 38 Front Row Motorsport Ford Mustang of Todd Gilliland was also in it.

Lap 193: Ricky Stenhouse Jr. leads them to the green.