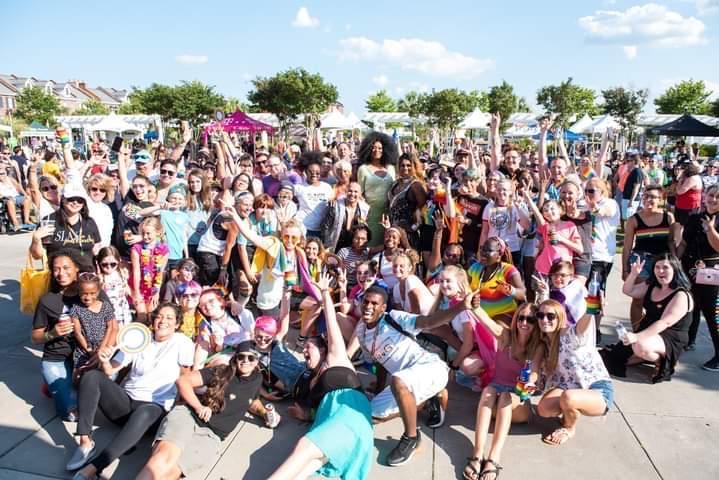 Izzy Zygmont stands with participants in the Pride Festival at The Market Common. (Leea Port)

Izzy Zygmont stands with participants in the Pride Festival at The Market Common.

Student Activists Speak Out for Change

Last June, Senior Ren Babbs marched at The Market Common, among a flood of community members chanting “Black Lives Matter” in response to the killing of George Floyd.  Several Socastee High students participated in the protest, part of a generation speaking louder than ever before to inspire and ensure change.

“I felt absolutely amazing just seeing a whole bunch of people together, especially being a black person and also being a part of the LGBT, because it was during pride month,” Ren says. ”It was really great to know that there’s people out there that actually think my life matters and that like my voice matters.”

Ren and the marchers are among several bold, bright students at Socastee actively using their voices in person and on social media to speak up and spark change. They are advocating for topics  such as racial equality, women’s and LGBT rights, climate change and gun control.

“I think in recent years there have been so many more young people interested and involved, and that’s a really good thing,” Young Democrats Club Advisor Mrs. Suzanne Troiani says. “The earth is leaving it up to you guys, and we’re counting on you all to make it better for us in the world. We need you to get involved now.”

Students of all grades are excited to speak up. Freshman Merritt Yoder consistently speaks out by posting on social media, signing petitions and attending protests that advocate for topics such as environmentalism, as well as animal, immigrant, and indigenous people’s rights.

“I think it’s really important to advocate for minority groups, even if you’re white,” Merritt says, “and to understand your privilege as a white person; just understanding that you’ll never understand, but still continuing to advocate for them.”

Raised in “left-leaning” Fort Wayne, Indiana, Merritt has continued to be true to her progressive beliefs as she adjusts to the conservative South Carolina ideas.

“It’s really weird because I’m so used to being surrounded with people who have the same ideas as me,” Merritt says. “But now I definitely see that talking about it definitely helps you see the other side. It’s really important to understand both sides, or at least learn both sides.”

Merritt has tried to inspire others to engage in enlightening conversations by speaking up against ignorant comments made in class and spreading awareness of what she feels important consistently on her social media platforms. For example, last September Merritt voiced her concern for the violation of fishing rights of the Mi’kmaq People, an indigenous tribe in Canada and northeastern Maine.

“If they change their mind, then that’s great, that’s cool,” Merritt says. “But if they don’t, at least they understand it a little bit better. They definitely learn more if you talk to them.”

A popular way for teenagers and young adults to engage in open discussions and spread awareness is through social media. On May 8 last year, Senior Emma Claire Everett shared an Instagram reel three months after the murder of 25-year-old Ahmaud Arbery, speaking out against police brutality and black injustice. Arbery was pursued and fatally shot while jogging near Brunswick in Glynn County, Georgia. He was unarmed.

“This recent incident struck me very deeply,” she says. “As someone who’s white, it’s caused me to recognize my privilege, to take a step back, and to say, ‘There is an entire race being targeted based solely upon the color of their skin.’ And it’s made me think to myself, ‘Is that okay? Am I going to stand for that any longer? And the answer is ‘No, no I’m not’.”

Not as many marches have been going on now due to the pandemic, she says, but teens have found other ways to protest.

“We can write letters, make phone calls, and do things just like this — where we sit down and make our own posts expressing our feelings upon the issue and really make a change.”

Emma Claire’s video entitled #ChangeforAhmaud currently has 647 views. She encourages her viewers to consider the impact that they can make with spreading awareness of the Black Lives Matter movement with their actions of reform and with the help of social media. She admits that the leap she took with posting a public video on a controversial matter was scary, but that it was a small step for a bigger cause.

“I honestly was really nervous about it,” she says. “I like to avoid conflict. I try to stay out of arguments, but sometimes it’s unavoidable when you like to advocate for things that you care about.”

Once she started talking about controversial issues, she felt more comfortable.

“It gets easier because you find other people that have the same thoughts,” she says.

Other student activists also say that it can be hard to start a conversation about controversial topics, especially because adults often discourage it.

“I’ve always been told since I was little to never get political on any platforms that you have,” Junior Izzy Zygmont says. “But I think it’s important to get political, especially if you have a platform, because it helps to get that word out.”

Izzy spreads awareness for the Black Lives Matter movement and immigrant rights by posting information that has been researched, providing links to petitions and for donations, as well as attending some protests and supporting events. Also, as a member of the LGBT+ community, Izzy has a sincere passion for advocating for LGBT+ rights.

“It’s always kind of fearful in a conservative area, just because you’re actively going against what is ‘the norm’,” Izzy says. “There’s a lot of racism, misogyny, homophobia, transphobia, all kinds of things normalized, especially in our area, and so when you voice out against it, you’re immediately outcast for it.”

But Izzy is hopeful people can come together to discuss controversial topics.

“It’s considered taboo to discuss them, but if we come together as a community to lift each other up and help get the word out, I feel like things will slowly become more acceptable.”

Despite the challenges teens face when speaking up for change, Izzy encourages students not to be ashamed of their voice.

Ren Babbs agrees, and has no qualms about advocating publicly for racial equality, LGBT+ rights, and mental health awareness.

“I think it helped a lot with bringing awareness,” Ren says, “and especially in our community. I feel like that’s important, to see more people getting involved.”

They has noticed more young people openly expressing themselves.

“It’s so progressive now, like no one’s scared to talk about certain things anymore,” Ren says. “Everyone believes that we should be more open minded, especially with mental health. I’m so happy that stuff like that is finally normalized. Before people used to just push it underneath the rug.”

The only way change will continue to happen is if the trend continues, they says.