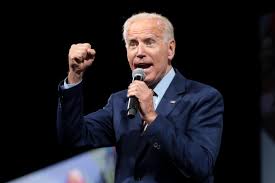 A vote for Joe Biden is a vote for justice. Justice is the concept of everyone getting what they deserve. It is fair to say that we do not live in a very just society under President Donald J. Trump.

First, the way we reward labor in our society is fundamentally at odds with the value of that labor. Some of the richest Americans have not produced anything tangible in decades. They either won it on the markets or inherited it. They contribute nothing to the economy excluding capital. They do not even pay their fair share of the taxes to the government that allows them to make such immense lucre.

By using their political influence, the super wealthy have successfully written a tax code that allows them to pay less taxes as a percentage of their income than the rest of the population. In addition to tax reform that will bring back the middle class, Joe Biden and the Democratic Party will bring in mandatory paid sick leave, healthcare reform, and many other solutions to the economic crises of the modern world.

Democracy is more than just a method of choosing policies; it is also the spirit in which we hold each other. In a democracy, there should not be unreasonable investigations, bought offices, and corrupt bargains. However, the Trump administration has spent the last four years using the full arsenal of the federal government to attack his rival, sell off political offices to the highest bidder, and enriching himself at the expense of the American people. Trump has destroyed the rule of law.

First, he instructed the government to investigate an unsubstantiated conspiracy theory about his challenger Joe Biden and Biden’s son Hunter. If this was not enough, he has completely ignored American whistleblower protections and instructed the Department of Justice to attack those who try to warn the people of his misdeeds, which include tax evasion, campaign violations, and illegal conspiracy with foreign agents. This has created a culture of authoritarianism among those who should protect us from executive overreach.

There is only one way to restore American democracy. Vote for Justice! Vote for Democrats up and down the ballot. While Joe Biden for President and Melissa Watson for Congress may not be the perfect candidates for America this year, they are the best we have.

Mac Malambri is a pre-IB sophomore who loves politics, economics, and philosophy.