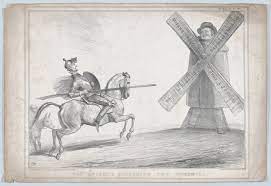 OPINION: Why Now is the Time to Read Don Quixote

The world has been through a lot lately: a global pandemic, isolation, and violence both near and far. There’s more, but I’m limited to 450 words. Pity. Life has just been…bad lately. An article from CNBC even claims that the pandemic’s effect on teens could last years, impacting their children in the next generation. The future feels sad and uncertain, like we need someone to come along and make everything brighter. That’s right, folks. We need a hero. We need Don Quixote.

Isn’t that the one who attacks the windmills?    Just the man.

And talks about that lady who’s not actually real?    The very same.

Yeah, that doesn’t sound like something I really need right now.   Wait! Let me explain!

The reader with all the questions is correct. And to those readers not familiar with Cervantes’ wanna-be knight, I’ll warn you now. If you’re looking for a hero that gallantly rides in on a white horse, wearing a suit of shining armor, slaying all villains and monsters in his path, look elsewhere. Don Quixote is not your guy. He would, however, love to meet your guy, so give him a call if you find that perfect paragon of heroism and chivalry.

Don Quixote is the guy, as the reader mentioned, who goes a bit crazy after reading too many books about chivalry, romance, and knights-in-shining-armor. Then, in an attempt to emulate the heroes he reads about, he leaves his home to become a valiant knight. Along the way, he finds a peasant farmer to be his squire, invents a noble lady to fight for, and charges toward the windmills of La Mancha, believing them to be giants. He does a lot more than that, but again, 450 words. Don Quixote is absolutely ridiculous, and that is why we need him.

After 400 years, Don Quixote has come to represent optimism, imagination, and impracticality. I read Don Quixote in August 2020, when at-home and hybrid schooling and fear of disease surrounded me on all sides. It brought comfort to me, and it has brought comfort to countless others over the years–including author/activist/professor Ariel Dorfman, when he was a refugee seeking asylum in the Argentine Embassy of Chile, after the overthrow of Salvador Allende. In times when the unknown was the scariest thing we knew, Don Quixote brought cheerful reassurance and uproarious joy. Because, when you don’t know what the future (or even the present) holds, it’s inspiring to read about someone who charges blindly into it. You come to believe that you can face whatever comes–be it giants, windmills, or global pandemics–without fear.

Megan Lane received an Honorable Mention in the New York Times student editorial contest. Over 16,600 entries were submitted; there were only 11 winners, 18 runners up, and 53 Honorable Mentions.