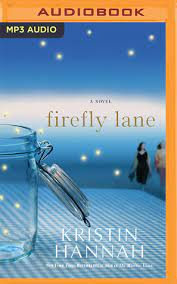 You may have heard of the new series on Netflix called Firefly Lane, but you may not know it was a book first.

The book, also called Firefly Lane, is by the well-known author Kristen Hannah. It is a coming of age story about two friends, Tully and Kate, who grew up together on the same street. The street is called Firefly Lane. They both come from different family dynamics — Tully a drugged out single mom and Kate a more traditional stable family — that shape who they become as they grow up together. They start out as friends but quickly become family, and although they have their ups and downs their bond remains strong through the years.

Although the Netflix series is based off of the book, there are some major differences between the two that might upset those who read the book first. But overall, both the show and the book provide an entertaining story with a lot of depth.

One of the major differences is the way the events are presented. In the book, the story follows a chronological sequence, whereas the show jumps back and forth from past and present. The book allows for better character development because it’s easier to connect how the characters’ past shapes the way they are in the present. In the show, however, it isn’t as clear. Information of their past is only revealed as needed for what is happening in their present time.

The show also makes several character and plot changes. In one of the first episodes, Kate’s older brother Sean is introduced. In the show, he is revealed to be gay and is mentioned several times. In the book, he is actually her much younger brother is straight and hardly mentioned at all. Also, in the show Kate and her husband Johnny are separated, going through divorce. They stay happily married throughout the book, though. They also have three kids. Marrah, who is mentioned in the show, as well as twin boys.

The show also makes some changes made to Tully’s character. Many of the important details from when she was younger stay intact. The show mentions Tully’s relationship with her college professor, Chad Wiley. Her relationship with him goes a bit deeper than the show depicts. In the book, they are together for several years, he falls in love with her, and even asks her to move with him to where he has a new job offer. She chooses her career over him but he was the first person besides Kate with whom she has a real connection with.

The show depicts a similar relationship however it is more on again off again and not quite as intense as the book. She also meets another guy after she moves to New York that she has a causal relationship with that eventually ends after she wants more and he doesn’t. In the show, however he isn’t mentioned but Max Brody is. Tully is pregnant with his baby. In the book Tully never has kids, although she considers it, and Max is also never mentioned.

Despite all of these changes, the thing that remains the same throughout both the show and the book is Kate and Tully’s friendship. Although they have several ups and downs and twists and turns they remain forever friends for 30 years. Tully and Kate teach us the importance of how friends become family and we need to keep them by our side to get us through our hardships.